Research Question: “Determine the work done and the power of a balloon rocket.”
Assumption: the balloon rocket exerts an average thrust force of 0.5N.

Work:  The action of a force to cause displacement of an object.

Energy: ability to do work/ to cause motion and change. It is neither created or destroyed but can be transferred from one object to another or transformed from one form to another.

A free body diagram for the forces acting on a balloon rocket on a string.

A reaction force pair for the motion of the balloon rocket 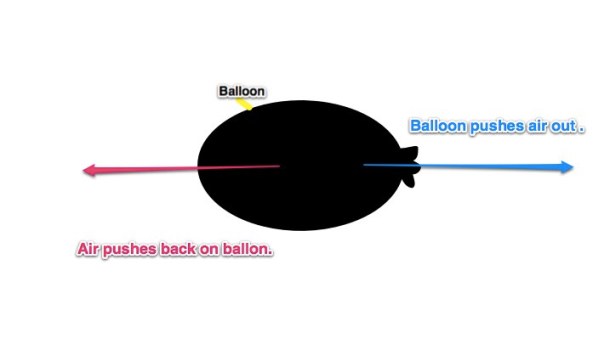 As the balloon is being blown and the tip is held, the air has no where to move. At this point, elastic potential energy is being stored in the balloon as it is being stretched out from its original shape. When the hand is released, the air has no where to go except for the opening in order to get back to its original position.So, when the mouth of the balloon is released, the elastic potential energy becames a kinetic energy and shows a thrust of force being released.

Validity and Reliability of the data

Efficiency: the ratio of useful work out from the total amount of work done, as a percentage (Taylor, n.d.)

This lab had enabled us to examine the overall work done and the power of a balloon rocket. As efficiency is the ratio of useful work out of the total amount of work done, the greater amount of energy transfers or causes the experiment to be less efficient. In this case, as there are more points in the balloon rocket run where energy is lost, the lab is not efficient. Some of those points can be seen as the balloon is let go and while it is in motion. As the balloon is released, energy is being exerted and also is being lost as it releases sound energy. Also, energy is being lost as it transfers into thermal energy as friction is revealed between the string and straw, as the balloon is traveling. The efficiency of the balloon rocket could be improved if the size of the straw is altered and a different string is used. With these suggestions, a shorter straw used and a smoother surfaced string would enable the balloon to experience less friction between the two objects. As there are less friction involved, the efficiency would be greater as there is a fewer amount of energy (both thermal and sound energy) being lost during the motion of the balloon rocket.

The assumption used for the average thrust force of the balloon for this balloon rocket lab is 0.5N. But as we have calculated and researched further with the actual materials we have used, we see that this assumption is not valid. We found that the actual weight of the whole balloon rocket (the balloon, straw and tape) was only 3 grams. In this case, we could say the balloon itself has a mass of 3 grams because the straw and tape are extremely light and may not have altered the overall weight severely. With this data, the actual thrust force of our balloon rocket lab can be calculated using the formula for force (Force= mass x acceleration). The mass will have to be converted from grams to kilograms, 3grams to 0.003kg. So the mass of the balloon would be 0.003 kilograms and will be multiplied by the acceleration. In this case, I have calculated the velocity first for each trial which can be formulated by velocity = displacement/time. Then using those solutions, I would divide them by the time once again to get the acceleration (Acceleration = velocity/time). Then to find the force, I would take those acceleration solutions and multiply by the mass (0.003kg) to get the force. So the overall equation would look like this:
Force (N) = Mass of Balloon (kg)  x [(displacement(m)/time(s) / time(s)]

Have a bibliography and cited all the sources.

Challenged myself to do the 5-6 questions on the assumptions of the thrust force on the balloon.